We’d initially planned a ride out at Herb Parson’s Lake yesterday morning, but it ended up not happening. So, we decided we’d go for a night ride instead. My Trail LED Darkstar came in while I was at Shenandoah, but other than showing it off its insane brightness to all my friends, I hadn’t done anything useful with it.

First off, I still can’t get over how small this thing is. I put it on my helmet (mounts with a simple velcro strap), and its weight is unnoticeable. I have a 4-hour battery pack, which, according to my kitchen scale, weighs just a fraction less than a pound (for comparison’s sake, a full 22oz water bottle is 1 pound, 11oz). It fits very nicely into a jersey pocket.
It comes with a handlebar mount as well, but I prefer the helmet option.

As far as brightness goes, I’ve never used anything comparable. This light is rated at 1200 lumens, and, looking at the MTBR Light Shootout list, is a great deal as far as lumens/dollar. When we rode to the trailhead (city streets), I kept it on the “medium” setting. It’s easy to switch between that and the brightest setting by just pressing the large button on top of the light. Once we got into the trail, it lit up the whole “corridor” of singletrack to near-daylight conditions.

Side note: I’m not gonna lie, trail riding at night is a little spooky. We heard a coyote barking/howling close by as well as lots of “mystery rustling” in the bushes. I’m glad Ryan was with me. I also came around one corner and saw a little owl standing in the middle of the trail. OMG! I didn’t know they came in pocket size! I don’t know the species, but it was less than 6″ tall, and stared into my light for a couple of seconds before flying off. Very cool.

Overall, I’m very impressed with the Darkstar. It’s definitely bright enough to be your only light, because the beam is broad enough to get the ground close to your front wheel, but powerful enough to shoot way down the trail at the same time. Improvements? I think my only wish is for a more “adjustable” form of helmet mounting. I found myself tilting my helmet back a couple of times so that the light would point down trail a little more. I’m going to experiment with different helmets and mounting spots next time I use it.

(9/21/10 Update: Just got an email from Grady @ Trail LED- going to get an adjustable helmet mount and give it another whirl!) 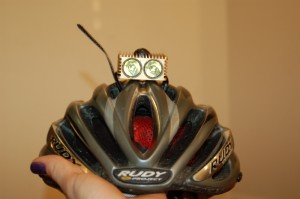 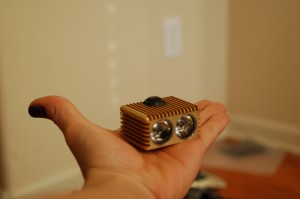 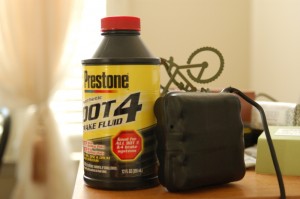 Hi, I'm Andrea! This blog is a journal of the highs, lows, and challenges in my constant search for adventure

The Andrea has no Friends Challenge